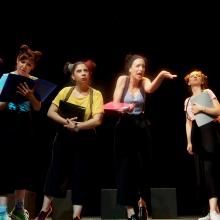 Marina Sotiropoulou Zormpala (Founder)
Marina Sotiropoulou Zormpala is Professor at the Department of Preschool Education of the University of Crete, in the subject of "Aesthetic Education". She has studied piano (National Conservatory of Athens degree), French Literature (National and Kapodistrian University of Athens BA), Psychology of Art (MA from the University of Sorbonne and Nanterre - France) and holds a Ph.D. of Aesthetic Education (Faculty of Philosophy, Pedagogy, and Psychology of National and Kapodistrian University of Athens). Her scientific interests and research activities focus on: a) the integration of art into education; b) teaching through the arts and c) the aesthetic - artistic education and training of primary school teachers. In recent years, her interventions in ANIMA groups concern the collection of research data on the integration of music in the pre-school and primary school classroom.

Dimitris Zormpalas (Director)
Dimitris Zormpalas was born and raised in Moscow. He studied classical guitar at the National Conservatory of Athens. He attended the Russian Institute of Theater Arts (GITIS) in Moscow with I. Promptova, L. Heifets, T. Yaris and other well-established professors.
He has participated in select theatrical performances of the National Theater of Greece and others. (for example: "Voices of the myth - voices of the oestrus" - directed by S. Sakkas, 1996, "The Persians" Aeschylus - directed by L. Vogiatzis, 1999, "Autumn baths" - directed by N. Zouka, "Oedipus at Colonus" - directed by S. Chatzakis). He teaches adult groups topics such as "Theater" and "Theatrical and kinetic improvisations." He has translated theatrical plays of Russian dramaturgists and has written theatrical plays for children. Since 2007 he has extensively worked with blacklight theater techniques, directing acts that utilize them, and teaching the technique of blacklight theater in seminars and workshops. He is the founder of the ANIMA Theatre for Knowledge and director of the Center for Artistic Education ANIMA.

Zoe Giftaki (Drama in Education Teacher)
Zoe Giftaki is a preschool educator. She has specialized in drama in education, drama therapy, organizing performances with children, bodily expression and movement. She has also been trained on topics such as: art therapy, social theater, Orff and Dalcroze systems, tai-chi, dance, theater make-up, costumes, museum education, pantomime and others. She has worked as a kindergarten teacher and has implemented educational programs for publishing houses, museums and other educational spaces (Nikas publishing, Kaleidoscope publishing, Goulandris Museum, Children's Museum, Red Cross, Action Aid and others). She teaches drama in education to groups of children and offers seminars on drama in education, design and implementation of theatrical-educational programs to teachers. She is head of theater education at the Kindergarten and the Primary School of “Ellinogermaniki Agogi” (the Greek-German Education School). Since 2006 she has been in charge of drama in education lessons at the ANIMA Artistic and Creative Education Centre.

Rea Karageorgiou Short (Dramatherapist, preschool educator)
Rea Karageorgiou Short holds a Bachelor's Degree from the Department of Preschool Education as well as the Department of Philosophy, Pedagogy and Psychology of the National Kapodistrian University of Athens. She holds a Masters Degree in Dramatherapy from the University of Hertfordshire (G. Britain). She has worked as a kindergarten teacher in Athens, as a coordinator of the "Mother and Child Welfare Organization" in London, as a psychotherapist at the "Open Psychotherapy Centre" in Athens and for many years she has been working as a drama therapist. She has extensive experience in training educators and animators, using the arts - and in particular theater - in education, having taught in many lessons and experiential workshops. She has taught for 12 years in ANIMA. During the last four years she has been teaching at the Graduate Program of the Department for Theater Studies of the University of the Peloponnese.

Natassa Zouka (Choreographer, director, actor)
Natasha Zouka, after graduating from the National Theater School and from the State School of Orchestral Art, continued her studies by joining Jacques Lecoq at the same school in Paris where she cultivated her interest in physical theater and choreography. She is co-founder of "Spring Theater" and "Dance Theater". She is a member of the Center for Voice Arts and Research headed by Spyros Sakkas. She directs the Art Act Area research space. Indicative productions: Music for a while, Fairy Tales of the World, Autumn Baths, Chaplin, LunaMuerta, The Earth's Songs, The Look of the Earth, At The End of the Moon. She has participated in numerous international programs ("Modern Dance and Dance in Ancient Drama" - France, "Modern Dance and Ritual" - Japan). Her creative actions have been sponsored by institutions such as the Ministry of Culture, the Institute of Ioannis Kostopoulos, the Onassis Foundation and others. She has a rich teaching experience as a choreographer in workshops for actors and children. She has taught neutral mask, movement and improvisation.

The following people have collaborated with and taught at the ANIMA centre: